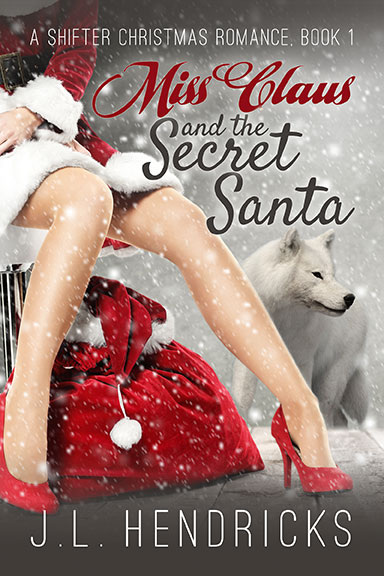 Miss Claus Arrived to Much Fanfare!

Miss Claus and the Secret Santa

This week was the release of Miss Claus and the Secret Santa! And she was very well received!

Miss Claus is the true story of Santa and his family. Santa Claus is an Arctic Wolf shifter. He is also the Alpha of his pack. There are more Arctic Wolves than anyone realizes due to the fact that they also shift into humans. In Santa’s family, the mantle of “Santa Claus” passes from father to son, but this one didn’t have any boys. He had 4 girls instead! What is a Santa to do? Come and join the fun of this new and exciting Christmas story filled with love, adventure, and even a bit of violence (they are wolf shifters after all).

Miss Claus and the Secret Santa

As humans, we have our intuition, or gut, to rely on. As an Arctic Wolf Shifter, Miss Claus relies on Christmas Magic! It is almost alive. In this true telling of who Santa really is, you will see Miss Claus listen to what the Magic is telling her. It guides her to her destiny, one she truly loves. But be careful, for it also guides her and Santa to those who would do them harm. Can Miss Claus find her “Santa”? Can the current Santa protect his pack, and his family, from a group of wolf shifters who want to take Christmas for themselves?

Not sure if this is your cup of tea? Keep reading for a short snippet from the book:

This was the worst day of my life! My mother just told me I had to marry Rock! Of all people, Rock! Please, what kind of name is that? Had I been born a guy, I would have a choosing ceremony this year. Where I pick my future spouse, instead of being told who I am to marry! This just sucks! I always thought I would marry for love, not convenience.

My younger sister had thrown a hard-packed snowball at me. Normally, I would have played with her. Snow fights were one of my favorite things to do around here. But not today. All I wanted to do was hide in my room and figure out a way to get away from Rock.

“Why not? I thought you loved snowball fights. We could get Rock and his brothers to join us,” Mandy suggested a little too enthusiastically.

“How did you know? I just found out myself!” I huffed out as I took my knitted cap off my head and smoothed down my hair. As she mumbled, my eyes narrowed, and I tapped my foot. “I can’t hear you when you do that. Speak up.”

“I don’t know what you are talking about. What did you find out?” She couldn’t make eye contact so I knew she was hiding something. Her hands were behind her back, and she was slowly trying to walk away from me.

“Mandy, what are you trying to keep from me? You know I will find out so just tell me.” As the future Mrs. Claus, the Christmas Magic had always been strong within me. I tried not to misuse my abilities, but I could read minds when I tried hard. In case you didn’t know, my dad is Santa Claus.

“I heard Dad say that we were going away for Thanksgiving this year. He wants us all to go with him to visit the European and Russian packs for a couple weeks.”

“Really? Who all is supposed to go with us?” My jaw clenched as I wondered about this bit of news my mother left out of our talk today.

“Rock and his parents and a couple of the enforcers…”

“I KNEW IT! No wonder Mom didn’t tell me! I bet she was going to wait until the last minute to tell me.” My breathing picked up speed as I stewed over her plan to get me and Rock together. I wouldn’t do it. There was no way I was going on that trip.

“When did they say we were leaving, Mandy?” I crossed my arms over my chest as I seethed.

“Um, in like, two days?” She shrugged her shoulders and scooted away from me even more. “I thought you would like to hang out with Rock and some of the other guys. You have always played with them.”

“That doesn’t mean I want to marry them!” I blew out a heavy breath and shoved my bangs out of my eyes.

Miss Claus can be found for only .99c on Amazon for a short time! So get your copy before it goes up to $2.99

If this sounds like a fun-filled adventure the whole family can read, that’s because it is! It might even help to convince your unbelieving kids that Santa really does exist!

It is a clean and wholesome read that teens and adults will enjoy.

Also, I have a free prequel to Miss Claus. Santa Meets Mrs. Claus is the story of how Lizzie’s parents met and became the current Santa and Mrs. Claus. You can get it for free by joining my mailing list: http://jlhendricksauthor.com/newsletter/ 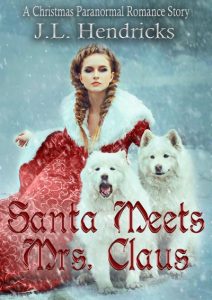 I am an avid traveler and my picture is from when I was in Moscow during the 2014 Olympics! I flew down to Sochi and attended the games by myself one weekend because my co-workers didn't want to go. I have NO FEAR! I am an independent author who writes Urban Fantasy and Science Fiction. Check out my author profile on Amazon - J.L. Hendricks
All Posts »
PrevPreviousSpectacular Recipes on #InstaFreebie
NextPotpourri Crazy on #InstaFreebieNext

This site uses Akismet to reduce spam. Learn how your comment data is processed.